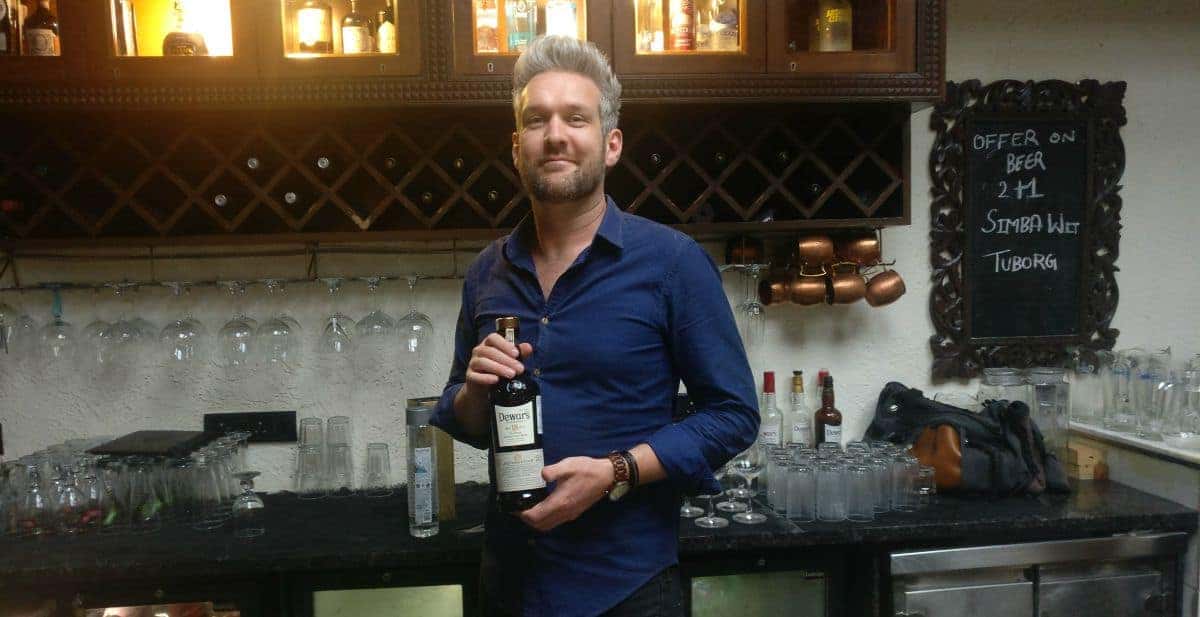 The weather in Mumbai even in September is full of dark, heavy clouds. The occasional downpour is more common than ever. “Reminds me of Scotland,” Fraser Campbell says, almost a little too cheerfully.

Campbell is the global brand ambassador of Dewar’s Whisky and was in India to drum up some love for his brand amongst bartenders. In Mumbai, he presented a few pointers on how to sell whisky cocktails, outlined the history of the brand and left bartenders impressed with his Highball cocktail. In Bengaluru previously, he was guest bartender at The Reservoire and wowed the audiences with some of his signature cocktails.

Campbell started bartending almost as soon as he was able to drink. Not a surprise really since he was born and brought up in Speyside – Scotland’s most well-known whisky-producing region. From Aberdeen University to the bars of Edinburgh, Campbell earned a name for himself as a cocktail master before deciding to fly halfway down the world in Melbourne, Australia.

In Australia, Campbell co-founded The Global Bartender Exchange, a sort of private social group with 1,50,000 bartenders coming together and exchanging knowledge. From there, he went to Spain where he further gained reputation as a mixologist. Three years later, Dewar came calling with a role as Global Brand Ambassador, a decision he says “took all of two minutes” to decide.

As global brand ambassador, Campbell is in charge of spreading the word about Dewar’s whiskies across the world. He did exactly that by describing the company’s three Scotch varietals, Dewar’s 12-year-old, Dewar’s 15-year-old and Dewar’s 18-year-old. He encouraged bartenders to guess the notes on each variety and suggested what type of cocktails would be best suited with them.

More importantly, Campbell tried to tell his audience that there is really no big gain out of drinking single malt whiskies compared to blended Scotch whiskies. “Scotland uses 90 percent blended scotch,” he said to reiterate the point.

A big part of his masterclass was spent on Dewar’s history and the exploits of Tommy Dewar, the mastermind behind the brand’s global success, apart from bartenders’ discovering how the brand received recommendations from Queen Victoria and was a favourite of US President Benjamin Harrison in 1889.

Campbell seemed keen to move the tag of whisky away from its old man’s drink reputation. He emphasized that many women prefer whisky cocktails nowadays. “We’re also seeing a lot of growth in non-traditional markets such as South East Asia,” he told Gurgl.

The Dark Side Of Chocolate, Uncovered

One enabler of this whisky revolution is the higher amount of whisky cocktails being served around the world. A trend that took off from the success of television series Mad Men, whisky cocktails such as Penicillin, Highball, Whisky Sour etc have made a roaring return to bars across the world.

“The Highball is one of the biggest moving cocktails in the world because of its relatively low ABV content. This also allows patrons to sit and enjoy the drink for a longer time,” Campbell said. He urged bartenders to create such a unique version of the cocktail that patrons are compelled to travel to their bar to drink it.

As he moves to make his signature version of the Highball, Campbell is confident that the whisky revolution will last for years to come.

Getting High In The Himalayas With Arak