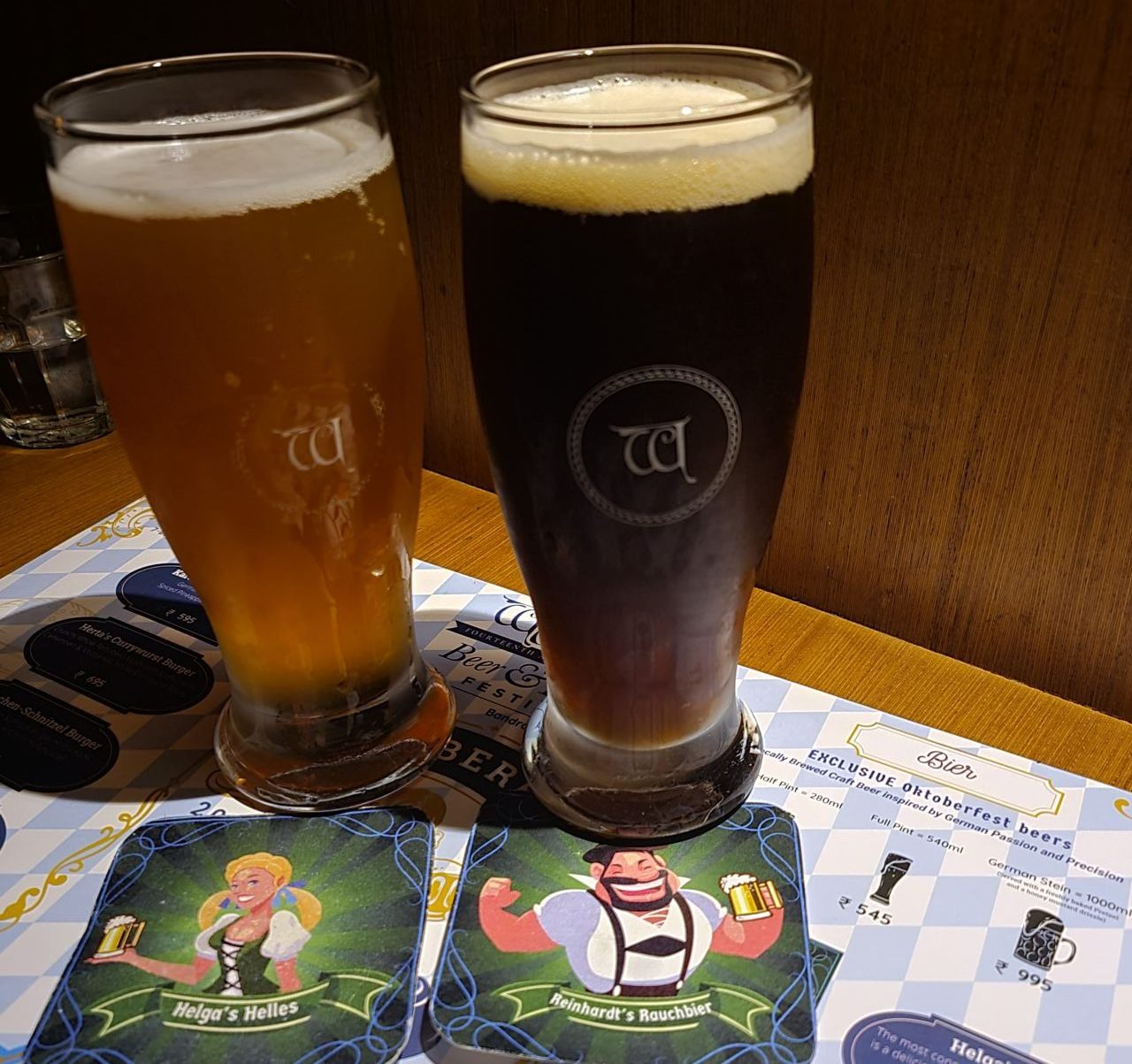 9 Spooky Cocktails You Need To Try This Halloween

Every year, Woodside Inn makes it a point to launch some new beers along with succulent burgers for its annual Beer and Burger Festival to coincide with Oktoberfest. While the real Oktoberfest stands cancelled for the second year in a row because of Covid-19, Woodside Inn has launched the 14th edition of its Beer and Burger Festival at its outlets in Andheri, Bandra and Colaba in Mumbai.

We decided to try these out at the Bandra outpost of Woodside Inn on a Saturday evening. Here’s how it went. There are a total of three beers that are part of the Beer and Burger Festival with two of them being curated by the folks at Gateway Brewery and one by 2 Down Brewing Co. We ordered both offerings from Gateway Brewery to start off with.

The first one is called Helga’s Helles, which no surprise is a Helles lager. The top citrusy notes and crisp finish of this one was a welcome respite from the hot weather outside and instantly put us in a good mood. It’s also an Oktoberfest must-consume so we had no qualms in trying this first. Helga’s Helles is easy to drink and easier to recommend of the three.

The second beer, called Reinhardt’s Rauchbier, is a lightly smoked beer that is typical to the city of Bamberg in the Franconia region where it was first brewed in the 14th Century. The beer itself was punchy and had great body and the smoky dark colour lent itself to a deeply satisfying drink. It lacked the crispiness of the Helles but the Rauchbier was a standout on its own in more ways than one.

We also tried 2 Down Brewing Co’s Gretel’s Gose. Gose was originally brewed in Goslar in Germany and takes its name from a river that runs near the town. We would have happily poured this Gretel Gose down the same river if we could. The beer, which should have been tart and refreshing ended up being too citrusy and tart-y to enjoy. The overt tartness killed all other flavours and made this inherently a bad last choice. We’d avoid this one if we could.

The beers are all served with a baked pretzel and honey mustard sauce, a nice Oktoberfest addition. Served on a multi-grain bun with house-made 15-day fermented sauerkraut and French fries, both the burgers were outstanding and managed to justify their price tag. While the Hähnchen-Schnitzel Burger had the perfect combination of juices to fried chicken pieces, the Der Hamburger was easy to chew and easy to make conversation over, without making too much of a mess.

Both the burgers managed to live up to expectations by the end of it. The fermented sauerkraut and French fries were a nice touch to the Oktoberfest menu as well and definitely adds to the overall appeal of the festival burgers.

The Beer and Burger festival managed to transport us briefly to Germany with a couple of exceptional beers from Gateway Brewing Co and Woodside Inn’s burgers. Apart from the faux pas with the Gose, there was hardly anything that we didn’t enjoy.

We would wholeheartedly recommend you give the festival a shot before the menu is taken off on October 31.

Do let us know what you think of Woodside Inn’s Beer and Burger festival 2021 in the comments below.

The burgers are tender, juicy and pretty good overall

Both the beers from Gateway Brewing Co hit the right spots

The Gretel's Gose was a letdown

9 Spooky Cocktails You Need To Try This Halloween

How These Two Friends Are Making A Splash With Their Brews