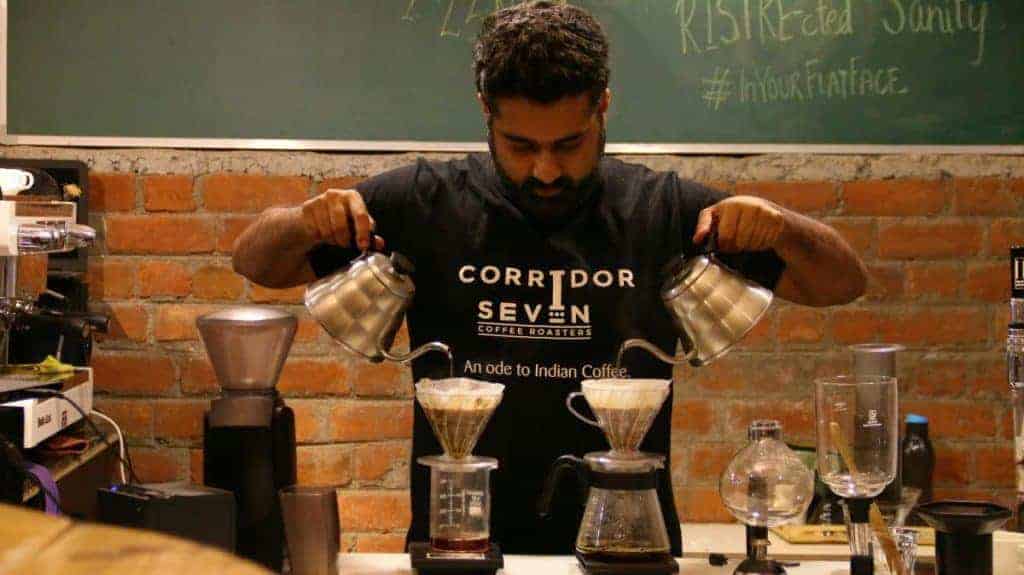 Mithilesh Vazalwar’s childhood memories are filled with heady aromas of coffee. The staff at his school in Nagpur always had freshly brewed coffee. Vazalwar, around 11 years old at the time, would sneak into the sixth floor corridor – only accessible to staff – just to soak in the brew’s scent. “The smell of coffee always takes me back to my childhood,” says Vazalwar, now 31, founder and CEO of Corridor Seven Coffee Roasters, who named it so as an ode to these memories.

Launched in Nagpur in 2018, Corridor Seven has evolved from a modest 200-sq ft roastery into a bustling café in a short span of time. Most items on the menu are made in-house. Like, the black milk served with chilled espresso in Blacksmith; the soda added to Sparkling Cold Brew, and, of course, the coffee blends featuring beans roasted in-house – mainly light and medium roasts.

In fact, even the water used in the recipes is house-made. “We’ve tweaked its calcium and pH levels because every element affects the taste of coffee,” says the Commerce graduate who now excels at the science of brewing coffee.

Vazalwar is among a handful of certified coffee Q graders in India. The Q-Grading exam is conducted by the non-profit CQI (Coffee Quality Institute) with an aim to create a community of cuppers (coffee tasters) around the world, who can examine and score coffee based on quality, thereby improving its standards globally. The exam comprises 22 sensory tests, conducted in red light to camouflage the coffee’s colours, spread over six days. Each tasting needs to be scored on parameters such as flavour, acidity, aroma and aftertaste.

Vazalwar, who was certified in 2017, went on a diet of salad, hummus and pita bread for almost a month prior. The idea: to sensitise his tongue to flavour nuances of coffee. “The exam was intense. I was the only Indian in the group. Nobody took me seriously on the first day. But after the first test, they realised that I had done my homework,” he says, referring to the training he underwent for two years in Delhi (during his stint with Blue Tokai), Chiang Mai and a two-day workshop in Melbourne in 2015, which sparked his interest in becoming a coffee roaster, leading him to quit his Chartered Accountancy practice. He is a former national level badminton player too.

In 2017, Vazalwar became the first to represent India at the World AeroPress Championship held in Seoul. Though both are press-brewing methods, AeroPress and French Press have their differences. “You get clean, smooth and crisp flavour in AeroPress because of the paper filter while French Press coffee is murkier,” he explains.

The mission to spread awareness and educate both local and international audience about Indian specialty coffee led to the birth of Corridor Seven. While Delhi and Mumbai would have been his go-to options, he picked Nagpur “because it gave him space to breathe”. One of the main challenges was getting the local palate accustomed to black coffee, especially the AeroPress version. “Initially, we would offer a cup of black coffee to every customer on the house. Today, from the 100 who walk in, 65 stick to black coffee,” he beams.

His core philosophy is ethical, sustainable and direct trade with farmers. Vazalwar has partnered with five estates within India, including a farm in Nokrek Ranges of Meghalaya and Riverdale Estate in Yercaud. In fact, Corridor Seven is the only roaster in India to source from Riverdale, which uses fruit-based fermentation processes. “Their beans have flavour notes of jackfruit, orange nectar and honey – all in one,” he adds.

Corridor Seven supplies coffee roasts to restaurants in Goa, Delhi, Surat and internationally via partners in Melbourne and Japan. The buyers also include home brewers across the country. “In the last five years, I’ve seen a huge shift in the conversation around coffee. Today, people are more aware about the flavour profiles and the brewing equipment. People in non-metros are also exploring what coffee is all about,” he says.

His plans for this year include participating in more championships, refining the food menu at the café and partnering with more coffee estates. And busting the myth that dark roast is low in caffeine. “The caffeine content in, say 100 beans of, dark and light roasts is the same,” he signs off.