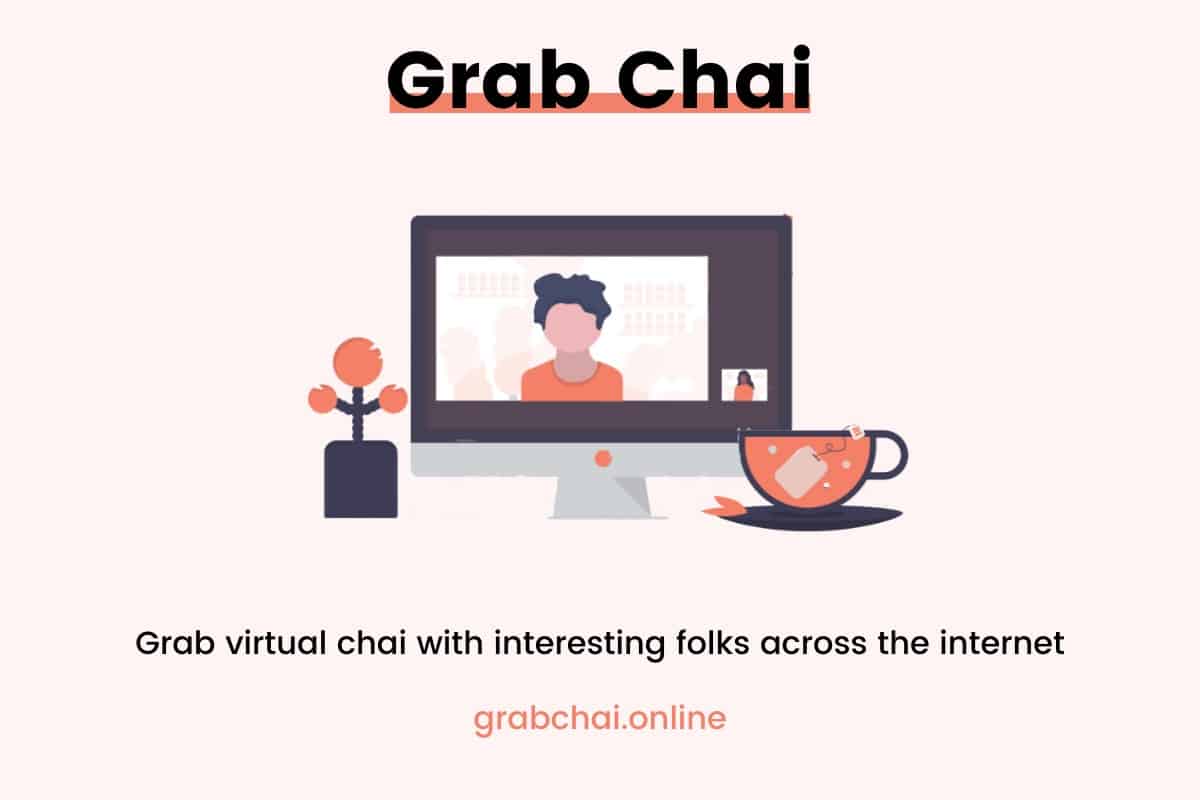 With social distancing becoming an important aspect in the containment of Covid-19 across the world, companies across the board have been asked or been forced to adopt work from home measures. We already know this but what’s caught our attention is the sheer number of people who miss their water cooler breaks with colleagues. Indeed, the casual 5 PM tea break feels like a special privilege now.

It’s something that Suhas Motwani thought about a lot much before the current corona virus forced everyone into their houses. He was working remotely for Pepsico for 15 months when he realized that the only thing he missed in an office setup was the chai break with colleagues. The current outbreak seemed like a good time to bring his idea to fruition.

Along with Aditya Mohanty, Motwani launched Grab Chai as a place where people could hang out and have water cooler conversations from the comfort of their home. The response, to say the least, was overwhelming. “We launched three days back and just put it out there on Twitter. There were two slots available and 140 people signed up,” Motwani says.

Motwani says whoever shows interest in joining Grab Chai is given a questionnaire to fill out. He sifts through the responses before connecting them to the right mix of people who meet virtually at a pre-designated time slot. These strangers then meet their new virtual colleagues and strike up conversations on whatever they wish to discuss. “The sifting bit is why we’re not opening more slots,” Motwani admits and says he’s hoping to automate the process soon.

Motwani is kicked about people meeting over virtual chai breaks. His idea is to bring together people who can turn into lifelong friends over shared common interests and make them feel less along in these uncertain times. He has also seen people who’re looking for new jobs and want to be a part of Grab Chai to connect with potential employers.

The idea for Grab Chai also has less altruistic purposes. “We’re overwhelmed with the response. We’ve seen early stage founders and VC firms connect with each other too and we’re exploring other avenues for monetisation,” Motwani says who is currently promoting the brand only on Twitter.

And why chai? “Because in office environment that’s what you miss the most. It also adds a very Indian element.”

With office romances being a part of corporate life, Motwani has quickly found that his venture has attracted eligible bachelors to strike up conversation with the opposite sex. Except there’s a mismatch problem. “Of the 140 people who signed up, only 20-25 are females,” he says adding that he’s organized a couple of video hangouts among those who’ve asked to be well, hooked up with the opposite sex. Motwani claims it’s not the intention of Grab Chai to turn into an online romance hangout but he’s unclear how things will proceed from this point.

The one thing that he is clear on is that Grab Chai is a sustainable business model. People have connected over common topics like music or technical stuff like marketing in their hangouts and Motwani feels that an offline version, starting from Bengaluru, is ideal for testing the market potential. He has even initiated talks with brands like Third Wave Coffee Roasters and Chai Point and is hoping once things get back to normal, he can test an offline version of Grab Chai at any of these places soon.

For now, the duo’s mission is to open up more slots, especially some night slots since they’ve had people from the US sign up as well and automate the process of pairing people who can join together.

If you’re willing to give them a shot, you can register for one of the Grab Chai slots here.

10 Must-Try Drinks From Portugal That Are Not Port Wine