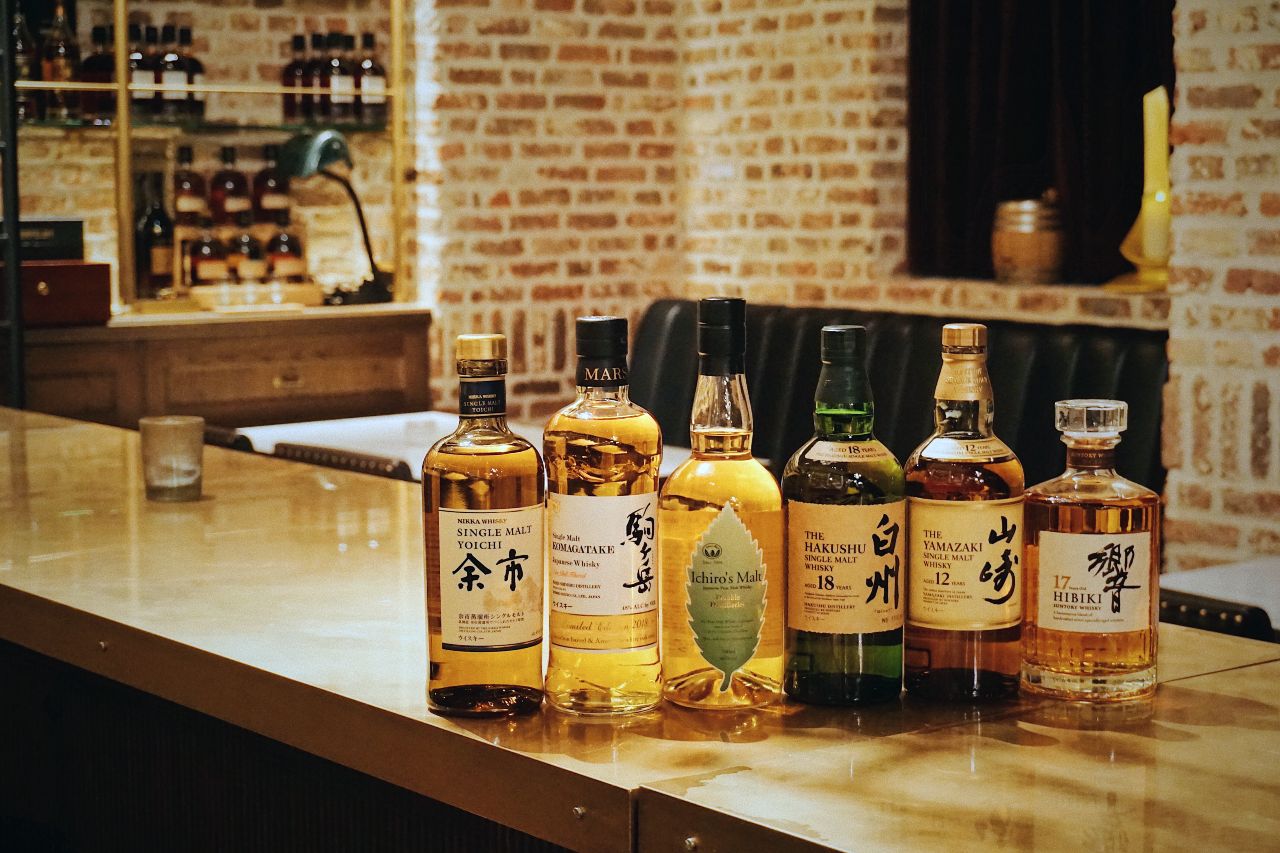 A good bottle of Japanese whisky (spelt without the “e”) is incredibly difficult to get your hands on, and exceptionally expensive at that. Like the names, the flavours and combinations can be tricky to understand. Worry not, here’s everything you need to know about Japanese Whisky!

Japan began crafting its own whisky as early as 1870, but commercial production didn’t kick off until the early 1920s. That was when a liquor importer named Shinjiro Torii opened the country’s first distillery in Yamazaki, a suburb of Kyoto known for its excellent water supply.

Serving as Torii’s top executive was a former student named Masataka Taketsuru, who’d spent three years in Scotland learning how to distil whisky. In 1934, Taketsuru went off to open his own enterprise, Yoichi Distillery in Hokkaido, which eventually came to be known as Nikka. Torii’s company, meanwhile, later became Suntory.

There are several companies producing whisky in Japan, but the two best-known and most widely available till today are Suntory and Nikka. Both of these produce blended as well as single malt whiskies and blended malt whiskies.

Right from the distinctive bottles to the spirits in them that commonly deliver luscious notes of fruit, cereal, vanilla, and malted barley. It is then no wonder that brands like Nikka, Hibiki, and Yamazaki are more popular than ever before. How is Japanese whisky different from Scotch:

Japanese whisky certainly draws inspiration from Scotch, but it is easy to differentiate the two. In fact, the only two things that are similar is the fact that Japanese whisky is most often made from imported malted barley, and some of it is peated too; and just like Scotch, Japanese whisky is traditionally distilled twice using pot stills.

The biggest differentiating factor is Japan’s climate, which experiences greater swings in temperature and thereby matures the whisky at a faster rate. The distilleries are almost all situated on spacious lands at higher altitudes with plenty of surrounding vegetation. This landscape is quite different from anything found in Scotland.

Second is the water quality. Japan uses “mythical” water that comes from the mountains near Tokyo. Japanese distillers and blenders believe that the chemical composition of each freshwater source contributes to the unique aroma characteristics of the whiskies made.

Thirdly, Japanese distilleries employ various innovations during production, such as using their own yeast for fermentation. They also use more than one type of yeast, which is not typically done in places like Scotland. This aims to achieve the best fermentation, allowing all of the flavour of the grain to be released.

Also, the shapes of their pot stills are different from Scottish stills.

For maturation, apart from ex-sherry and ex-bourbon casks, Japanese whisky also uses Japanese wood barrels. Some of these are made out of mizunara, a tree only found in Japan that adds its own distinct flavour. Distilleries in Japan typically carry out the blending process in-house, rather than trading casks with other places.

All these factors bring back control into the hands of the Master Distillers and allow for more experimentation with still types, fermentation and maturation. In Japan, the last part of maturation gives the malt a delicate, floral profile perfumed with a honeyed sweetness that is sometimes peated for a smoky, quasi Islay style of whisky.

Since Japanese whisky companies primarily cater to Japanese people, it’s important for them to make whisky that fits the culture of the people they sell to. Whisky is a common beverage that’s eaten with meals in Japan, which means that Japanese whisky companies such as Suntory manufacture whiskies that can be diluted. Whisky distilleries also focus on producing top-notch whiskies because their customers expect high-quality liquor from them, which is another factor in determining when whiskies are ready to go out to the market. There is a general emphasis on refinement and texture.

The concepts of harmony and balance are huge parts of the Japanese Whisky experience. They are major themes in the creation of Japanese malt and reflect Japanese culture.

There is a desire to capture a balance between the liquid and the flavour, so texture and maturation are important parts of Japanese Whisky too.

The flavours are exceptionally well balanced, with all the different notes complementing each other, with no single note or component fighting for attention.

Capturing harmony and balance within their malt is a reflection of the wider Japanese belief in achieving equilibrium between humanity and nature.

In Japan, attention to detail and balance are the foundations of Japan’s high-quality products, including fine liquor. This is one of the factors that Japanese whisky companies include in their whisky production to appeal to their consumers’ tastes. How To Consume Japanese Whisky:

The bulk of Japanese blended whisky is consumed in cocktails, notably as Whisky Highballs, while fine whisky is primarily had neat or on the rocks. Advertising for blended whisky generally features it consumed in a highball. Highball is a special drink that features Japanese whisky mixed with soda water. The soda water helps lighten up the whisky taste, which makes the whisky easier to drink with meals. Many Japanese whiskies are also made to go perfectly well with soda water since the Highball is a major part of the drinking culture in Japan.

Today, there are approximately nine active distilleries in Japan. However, all this while the rules of what could qualify as “Japanese Whisky” were rather vague.

As of April 1, 2021, new rules have come into place that all existing companies need to adapt to. The deadline to follow the new rules is 31 March 2024.

Raw ingredients: Malted grain must always be used, but other cereal grains can also be included.

Water: Water used in production must be extracted in Japan.

Production location: Saccharification, fermentation and distillation must be carried out at a distillery in Japan.

Distillation: Must be distilled to less than 95% ABV.

Ageing: Spirit must be aged in Japan in wooden casks of no more than 700 litres for a minimum of three years.

Strength: Bottled spirit must be at least 40% ABV. 5 Japanese Whiskies To Try In India:

Although water and climate are essential elements of the whisky-making process, what makes Japanese whisky unique from the other whiskies around the world is the culture and the people behind the whisky.

Have you tried any Japanese whisky to date? Let us know what you think of it in the comments below.

Heston Blumenthal’s Quest To Take A Quantum Leap In Gastronomy