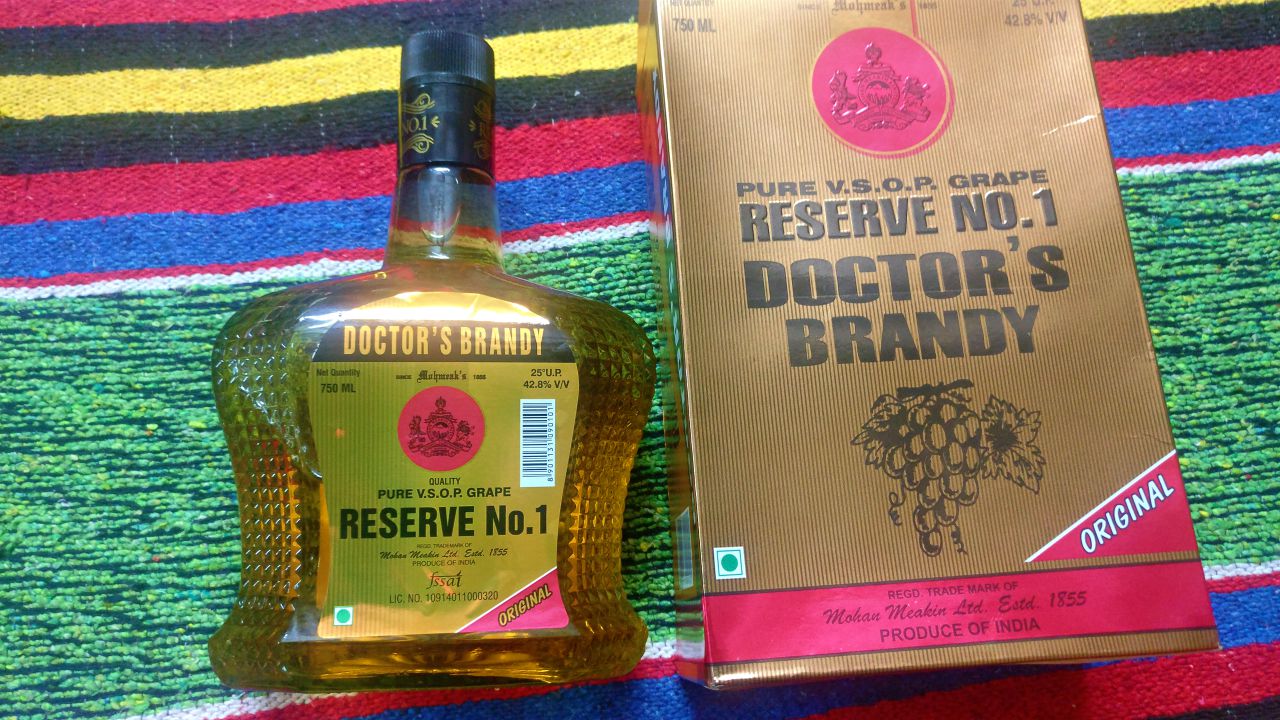 Amarlal Bajaj has seen an entire generation of doctors come and go with the same advice for common cold – just take some Doctor’s Brandy, add honey and lukewarm water and you’ll be good to go.

As far as instructions go, they couldn’t be simpler. Yet, Bajaj has seen brandy relegated to the sidelines while a wine revolution swept the country two decades ago and a spirits revolution occurred few years ago. “The market for whisky is 80 percent in India while gin, vodka and brandy constitute another six percent along with other spirits making up the rest,” he acknowledges. Bajaj, however, is a fighter and a visionary. In 1986, he was setting up a distillery in Goa when he was called back to nurture a distinct product for the family business. That was his first formal introduction to Doctor’s Brandy Reserve No 1 and its distinctive bottle that had the same shape since its launch in 1972.

Bajaj realised that his brandy would need to stand out to declare its premium value. In India, two types of brandy generally find takers. Cheap brandy made with grape essence is one category and the Doctor’s Brandy Reserve No 1 format, that has been following the same process that makes cognac the best-known brandy in the world.

That’s exactly what the Doctor’s Brandy Reserve No 1 has been doing since its launch even as modernisation helped improve the overall process. “Our process of aging, the ratios and formula, as well as the basic system, is still the same as it was in 1972,” Bajaj reaffirms.

It’s little wonder then that Bajaj was sent to France to learn the cognac-making process so it could be meticulously followed upon his return to India. His father Girdharilal Bajaj collaborated with Mohan Meakin, and decided to open his premium brandy.

Girdharilal, along with Mohanlal Bajaj, had founded Mohan Brothers in 1934 and quickly became the biggest importer and distributor of liquor in pre-independence India, with facilities across the country. Mohan Brothers has also been associated with Mohan Meakin, India’s oldest brewing company best known for making Old Monk popular, for over 40 years with the latter producing Doctor’s Brandy Reserve No. 1 Brandy. In fact, the only distinct change has been to its bottling over the years. Mohan Brothers, the company formed by his father, had been using the same bottling called as ‘push bottle’ from 1972 to 1988. Bajaj realised that the Doctor’s Brandy Reserve No 1 Brandy’s premium-ness deserved better representation. “That’s when we had the first change in our bottling. We tried a green colour bottle with wine pushup style and label sizes. In the next three-four years, we launched a square decanter limited edition bottle that was engraved to convey our premium product,” he says.

With a new generation discovering new spirits, it was time for another change in the bottling. The company recently launched new diamond-cut bottles (375ml and 1,000ml) as well as a limited-edition diamond-cut decanter (750ml and 1000ml).

Talking about the new bottles Bajaj says, “It was painstaking to develop the diamond-cut tall bottle. The weight of the bottle also went up by 50 percent. We also had to equip our filling-machine slots to handle the new bottles.”

In fact, the idea for a new bottle design took prominence after a limited-edition designer bottle was launched last year. The round, stubby, small bottles were an instant hit that accelerated the launch of the new diamond-cut bottles for Doctor’s Brandy Reserve No. 1 Brandy. Doctor’s Brandy Reserve No. 1 Brandy’s premium value can be gauged from the fact that it’s the first-ever Indian brandy to carry the VSOP – Very Special Old Pale – designation, a guarantee that it has been aged for at least four years, and made the same way the French make their brandies.

In fact, the brandy is aged for over six years in oak barrels to derive its signature smoothness and flavour. The grapes that go into it are sourced from Nashik and Baramati and are of the same variety that is used to make quality sparkling wines. The grape spirit is matured to its desired aroma and aged in oak casks to perfection. For all the technological improvements he’s brought forth to Doctor’s Brandy Reserve No. 1 Brandy, his legacy is now being taken ahead by his daughter Pooja Bajaj Chadha. Pooja, who had her first taste of brandy as a medicine when she was three, is on the lookout for new avenues to popularise brandy.

“Before the lockdown, we were in touch with restaurants, chefs and other stakeholders to see how brandy could be incorporated in their menus. I am 34 and I enjoy a glass of brandy as well as a cocktail with brandy on a Sunday evening. Essentially, we need to move the next generation to enjoy the taste of brandy,” Pooja tells Gurgl.

From brandy shots to brandy cocktails and other creative ways of using the grape spirit, there’s a whole new market waiting to be discovered. Eventually though, it all goes back to brandy’s health benefits. With the current pandemic not sparing the Bajaj family as well, the advice of doctors over the decades rings as true today as it did when Doctor’s Brandy Reserve No. 1 Brandy Pure V.S.O.P. was first introduced all those years ago.