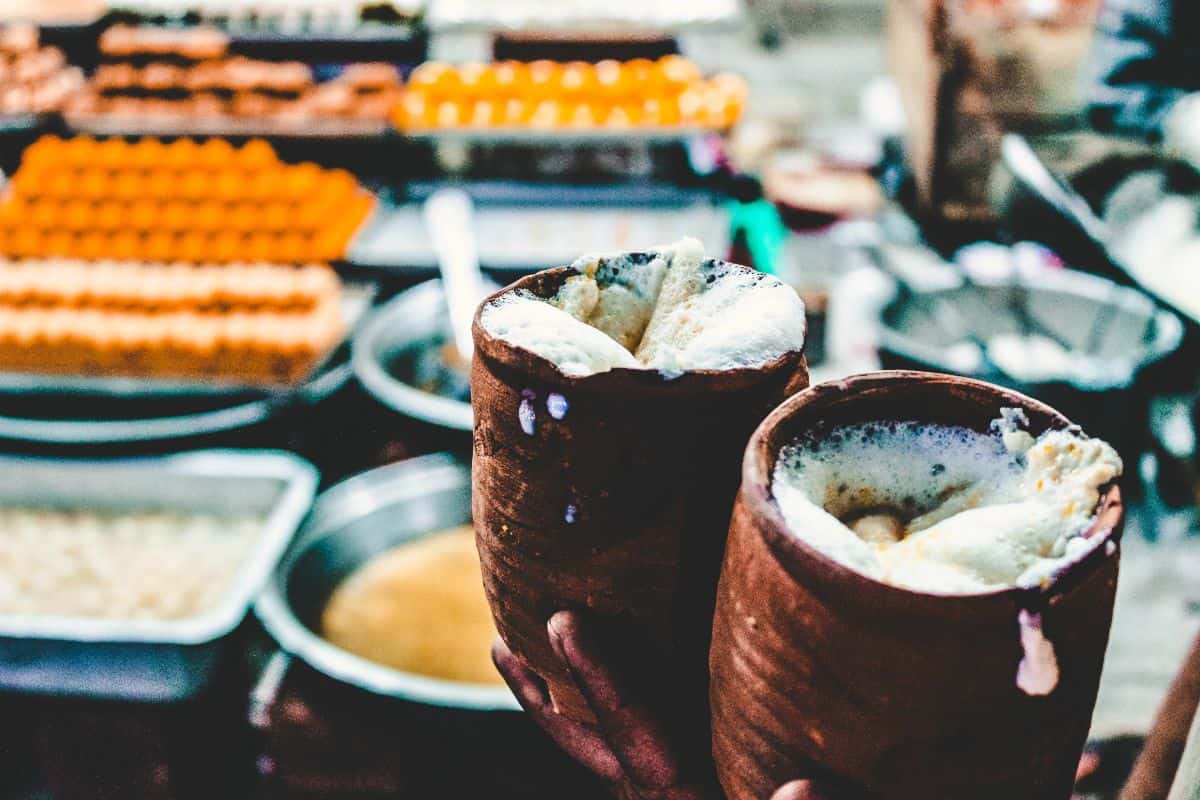 It’s well-nigh impossible to taste all the culinary goodness that India has to offer in one lifetime. One can try though. The list of well-known drinks in the country itself can keep anyone happy for a long time. A month at least, to be precise, if you follow this guide to the most popular drinks, each belonging to a different state.

That’s true, each state in India has its own culture, tradition, and drink. You would want to ditch the usual Pepsi and Coke or even good old ‘fresh lime soda’ for the local drink of the place you are traveling to. Here’s the full list of drinks to try in each Indian state.

Lassi is loved all over the country. But it belongs to the land of the people with the biggest hearts in India, Punjab. The sweet creamy drink is especially refreshing during hot summers when temperatures are soaring. Over the last few years, Lassi has seen variations in terms of flavours like rose, kesar, mango, etc.

Pannah, or as some call it ‘Aam Pannah’, hails from the dry state of Gujarat. While alcohol is banned, people still find a way to make their ‘drinks’ interesting. One such drink is the Pannah, which is made from raw mangoes, along with some pepper, cinnamon, cardamom, and salt. It is generally consumed in the summer months, the season of mangoes. Pannah helps keep the stomach cool in high temperatures. It is sometimes used as spiced water in ‘Pani Puri’.

Goa is the land of cashews and coconuts. Both of these popular ingredients are used to make traditional feni in Goa, an alcoholic local drink. It is quite pungent and strong. If you have a low tolerance towards intoxication, feni is not the right drink for you. But if you are looking for that instant kick, go for it!

The people of Jammu and Kashmir do not drink the typical milk tea. Instead, they drink Noon Chai, or ‘pink tea’ two to three times a day. The drink is garnished with almonds, cardamom, pistachios, for a spicy flavor and some great aroma. The tea also has a hint of salt making it savory, and a hint of baking soda, making it pink.

You must have heard of the famous alcoholic drink Toddy. Neera is one step before the drink ferments and turns into Toddy. The sap of palm trees like coconut and date palm are extracted and the palm nectar is known as Neera. It is sweet and sugary in taste, and makes for an instant refreshment.

Buttermilk is a variant of Lassi, except that it is much thinner in consistency and savoury in taste. The people of Andhra Pradesh eat really spicy food. In order to cool the stomach after the spice fest, they consume buttermilk as a substitute for water. The drink is spiced with ginger, curry leaves, salt, and coriander and also aids in digestion.

When the ‘Neera’ is fermented further, it becomes Toddy, also known as Kallu. It is the extraction from the palm of sap trees and sweet in taste. Toddy is quite strong and contains an alcohol percentage that is quite high. Not one to be taken lightly! Everyone who knows Holi knows the drink Thandai. It is the drink that is usually mixed with ‘bhaang’ and consumed during the festival of colours. The drink draws its inspiration from the Mughals. The flavour of Thandai is enhanced with flavours like rose, kesar, pista, cardamom, fennel, etc. It is an ideal drink to consume during summers.

Sattu is made from roasted gram flour. Its juice, known as Sattu Sharbat, is a protein packed energy drink that is good for the gut. The drink is quite filling and can be consumed as a replacement for a meal. A local protein shake, if you want to look at it another way.

Chaas is similar to buttermilk and is a savoury variant of Lassi. This watery drink is usually flavored with mint and ginger. While Chaas is traditional to Haryana, it is generally consumed throughout the country.

The Mahua tree is a tree whose flowers are edible and are used for medicinal purposes. This flower is also used to make the drink of the same name. Mahua is a huge part of the culture of the tribes that inhabit Chhattisgarh. It is consumed at every festival and every occasion of celebration.

Rajasthan is a state that loves its food. The common folk as well as the royal family- no one compromises on food. Kesar Kasturi, formerly a drink for the royalty, is now widely found in every household of this state. Spiced with more than 76 flavours, Kesar Kasturi is a must-try at least once.

Chaang is related to beer in some ways. It is made by fermenting a type of millet in bamboo barrels, dhungro. The process can take anywhere from seven days to six months. Originally, Chaang belongs to Nepal and is consumed on cold winter nights.

People in India love their liquor. The people of Madhya Pradesh brew their own rice beer, called Handia. It requires a combination of over 20 herbs for the fermentation and takes about a week to be completely ready. The alcohol percentage in the drink is not that high. Being a type of beer, it is served chilled. Another form of rice beer, this time from the North Eastern state of Meghalaya is Kyat. Relatively low on alcohol content, it still gives you a high after about two glasses. The drink has a pungent yet sweet aftertaste.

Yet another rice beer is one from Assam and is known as Xaj. Boy, are these popular! Xaj is usually served chilled and in copper vessels.

Zutho is a rice beer with a lengthy and elaborate process of fermentation. It is sweet as well as sour in taste, and emanates a fruity aroma. This frothy beer is served along with some red chilli, soya and roasted millet.

Kokum Sharbat is popular in Maharashtra and generally consumed during summers. It helps to keep the body cool. Kokum Sharbat also aids the process of digestion. It can sometimes also be used as a substitute to tamarind pulp in cooking.

Yu is a vodka-like drink made from fermented rice. Yu is used for medicinal purposes. It is used as a drink to simply relax and let go!

Indians really love rice beer, don’t they? Arunachal Pradesh has its own variant, known as Apo. In order to make Apo, rice is first roasted until it blackens. It is then added with one of the spiciest chillies in the world, the Bhut Jolokia. Apo is served at room temperature.

What do you normally do with water that is left over from boiling rice? Throw it away? The people of Odisha have a unique application for it. They mix it with ragi powder and ferment it. The resulting sour drink is then consumed on a hot day in the form of Mandia Pej.

Apples are abundant, fresh and juicy in the hilly areas of Himachal Pradesh. The Himachalis use it to make Kinnaur Ghanti, an apple drink similar to vodka. This refreshing drink can be consumed at any time during the day, no questions asked!

Who hasn’t heard of Kashmiri Kahwa? It is a refreshing hot tea made with cloves, cinnamon, saffron, cardamom, and dried fruits. Kahwa is offered to guests as a welcome drink by the Kashmiris. It consists of various medicinal properties and helps with the digestion process. Originally from China, tea quickly became the national drink of India thanks to the British. People drink tea in the morning as soon as they wake up and in the evenings along with a light snack. Tea, popularly known as ‘Chai’ can be made with milk or without, with various different spices such as cloves, cardamom, ginger, lemongrass, fennel, etc for additional flavour.

A sweet, pink coloured drink similar to a rose sharbat, Buransh has the consistency of a jelly. It is basically the nectar of the local flower rhododendron. The drink is usually garnished with the leaves of the edible flower.

Rice and Mahua flowers are used in combination to prepare the famous Cholai from West Bengal. The flavours of both ingredients are equally distinct and appealing in the drink. Do not mistake it for one of the rice beers as this is fairly distinct from its North Eastern neighbours.

A popular wine among the people of Mizoram, the Zawlaidi is commonly referred to as a love potion. Mizoram is abundant in its grape production. This makes for some excellent wine in the region, the most premium one being the Zawlaidi.

Another refreshing drink from the Punjabis is the popular Shikanji. It is a drink made from lemons, ginger, water, ice, salt, and some sugar. It is lovingly known as ‘Nimbu Paani’ in most parts of the country. It is the perfect drink to rehydrate yourself after a long day or during a hot summer day.

Aamras is sweet mango pulp that is usually extracted by squeezing ripe mangoes. It is eaten along with chapatis and pooris. Aamras Puri is one of the most popular meals. Mostly only mango pulp, sometimes it is mixed with milk and sugar to give it a different taste. Aamras is a hot favourite during the summers!

With so many tempting drinks to try from, it can be difficult just to go out there and try the first drink. Just pick the one that appeals to your taste buds the most from this list and go from there. You’ll be surprised at the one you end loving the most by the end.

10 Amazing Facts You Should Know About The Prohibition Era