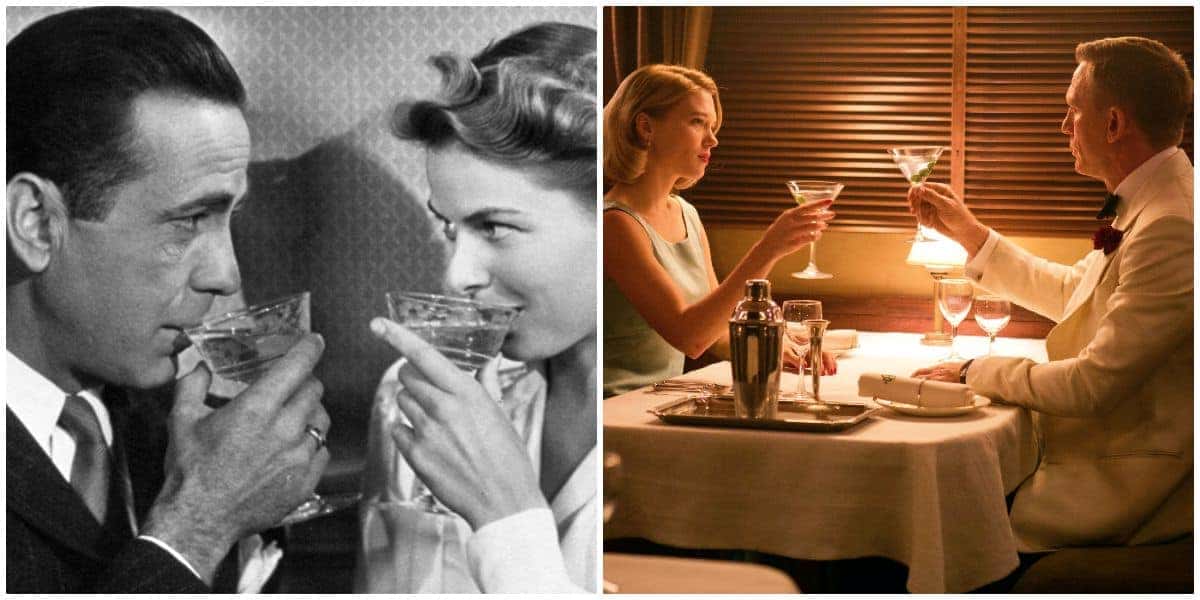 Cocktails and Hollywood have long mixed together and given patrons some of the most iconic drinks on the silver screen. These drinks gained fame thanks to their ‘cameo’ role, especially in the protagonist or antagonists’ hands. It could be anything: The way they ordered it, the way the bartender made it, the importance of the scene during which the drink was ordered, or even how often the person orders the same drink in a particular manner.
Regardless of your age, we bet you can immediately think back to at least one movie that featured a drink, even if it’s James Bond’s shaken-not-stirred martini. Here’s a list of some movies you can binge watch that have featured drinks that went on to become as big as the movie they feature in.

Take your pick from the list below and let us know how many of these you’ve already seen.

If there was ever a duo that had a drink in every other scene, then it has to be Nick and Nora Charles from The Thin Man series. The Bronx, a popular pre-Prohibition drink, combines gin, sweet and dry vermouth, and a splash of orange juice, shaken to a two-step time, as Nick (played by William Powell) famously ordered his drink to be.

The French 75 was popularised in America in the 1940s thanks to Casablanca that featured lead actors Humphrey Bogart and Ingrid Bergman’s utter class. Typically, a French 75 is comprised of a refreshing mix of gin (or maybe cognac) with lemon, sugar, ice, and Champagne. Why 75? Well, because the drink had such a kick that it felt like being shot with the powerful 75mm Howitzer field gun carried by the French and the Americans.

This cocktail enters the scene when Cary Grant flirts with a woman on the train he’s traveling through. The woman was none other than Eva Marie Saint. Also, in the movie, it is interesting to notice that the cocktail’s garnish is swapped by classic olive or citrus twist in a dry gin Martini for a pickled pearl onion.

Some Like It Hot is the Marilyn Monroe movie in which the Manhattan cocktail got lucky enough to be cast. In the movie, Marilyn Monroe uses a drumstick, cymbal and hot water bottle to stir up a Manhattan while on a train and seals this cocktail’s iconic status. A Manhattan has two parts rye, one part sweet vermouth, two dashes bitters, and is garnished with a cherry or twist. The bond between martinis and James bond goes back to original Ian Fleming novels. Yet, surprisingly, in the first 007 movie, it was actually the villain who orders a martini cocktail and says the now iconic line, “shaken, not stirred”. However, Sean Connery, the Scottish actor who essayed the character of Bond, followed him by ordering the same cocktail, thereby starting a long-standing tradition for future James Bonds.

The Scotch Mist cocktail made its’ debut in this dark noir movie based on Raymond Chandler’s best-selling book by the same name. It stars the attractive Lauren Bacall as Vivian Rutledge opposite Humphrey Bogart who plays private detective Philip Marlowe. Vivian orders a Scotch Mist, which is little more than Scotch on the rocks with a touch of mystery that quickly gained reputation on screen as the femme fatale’s poison of choice.

The comedy movie starring Robert De Niro where he plays a possessive to-be in-law also gave rise to one of the most popular cocktails today. Tom Collins has multiple references and appearances throughout the movie. The cocktail is made using gin, lemon juice, sugar, and carbonated water and was first mentioned in 1876 by Jerry Thomas, the father of American bartenting whose book we recently recommended.

This also wasn’t the first time that De Niro had a connection with ‘Tom Collins’. In the gangster epic Casino Tom Collins is the alias that his character, Sam “Ace” Rothstein, uses to register his personal safe deposit box.

Probably the most definitive movie on bartending, Cocktail sees a young Tom Cruise play an aspiring business student who takes up flair bartending to cover his tuition. One of the most popular drinks from the movie is the Red Eye, a now-popular hangover cure that consists of vodka, Bloody Mary mix, cold beer and a cracked raw egg.

Sweet Vermouth on the Rocks with a Twist – Groundhog Day (1998)

Most people prefer their Martinis dry, bone-dry to be specific. This drink was made famous by Bill Murray’s character Phil Connors in Groundhog Day when he orders the drink and says, “It always makes me think of Rome, the way the sun hits the buildings in the afternoon.” Now, that would make anyone want to try Sweet Vermouth on the Rocks with a Twist, don’t you think?

These movies made the cocktails they featured an overnight rage. Everyone knew these cocktails and made sure to order them whenever they hit a bar. Of course, there are many other cocktails, but these now stand out from the ordinary. Tell us if you noticed any other cocktails which were an essential part of a movie, in the comments below.